CBD may help users to relax and unwind. By interacting with numerous receptor sites associated with feel-good neurotransmitters, CBD can temporarily shift brain chemistry to support feelings of ease and contentment.

Many people report feeling a weight lift off their shoulders after a few drops of CBD oil. But why does this plant-derived molecule produce these effects? Could it be largely placebo, or does it really impact our circuitry that effectively?

Below, we’ll take a look at some of the science behind CBD's potential to help us relax and unwind.

CBD and the bliss molecule

Early research suggests that CBD increases levels of anandamide in the body. Also known as the “bliss molecule”, anandamide plays the role of an endocannabinoid neurotransmitter. The appealing name of this chemical accurately describes how it can influence the mood.

Anandamide binds to cannabinoid receptors of the endocannabinoid system. The neurotransmitter plays a key role in many physiological processes, including mood, sleep, and appetite. It appears to facilitate an equally important balancing act when it comes to relaxation and getting away from it all.

Research links low levels of anandamide to mood disorders and apprehension. Interestingly, CBD might help to raise these levels. Typically, higher levels of anandamide equate to a better mood and feelings of relaxation. The bliss molecule is even believed to contribute to the so-called “runner’s high”—a state of euphoria felt after aerobic exercise.

CBD helps to elevate levels of anandamide by inhibiting enzymes that break down the endocannabinoid. Research published in the journal Translational Psychiatry found that CBD treatment led to a significant rise in serum anandamide levels.

Additionally, another paper from the same journal states that “Pharmacological augmentation of central endogenous cannabinoid (eCB) signalling may be an effective therapeutic strategy to mitigate the adverse behavioural and physiological consequences of stress”.

As well as influencing the endocannabinoid system, CBD also binds to serotonin receptors. This presents another mechanism by which CBD may support relaxation.

Through activating the 5-HT1A serotonin receptor, CBD has been shown to reverse apprehensive behaviour in animal models. Interestingly, some anxiolytics target this same receptor site, which forms part of the serotonergic system, a network involved in mood, appetite, and cognitive function.

CBD vs tenseness: a testimony to the cannabinoid’s relaxing properties

Tenseness produces the exact opposite effects of relaxation—activation of the sympathetic nervous system. This leads to enhanced alertness, increased heart rate, and tense muscles.

Research published in the prestigious journal Nature provides an example of this. The study tested the effects of CBD on subjects with a social inhibitions. All subjects underwent a simulated public speaking event, but only one group received CBD (600mg). Researchers found the CBD group to report lower levels of cognitive impairment, discomfort and alertness, and increased levels of poise.

Further research published in the Journal of Psychopharmacology contains the findings of a study named "Neural basis of anxiolytic effects of cannabidiol (CBD) in generalized social anxiety disorder: a preliminary report". After giving subjects 400mg of CBD or placebo, researchers found CBD to have an influence on the confidence in those who received it, potentially by altering blood flow to limbic and paralimbic regions of the brain. 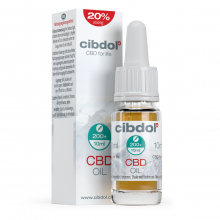 View product
Which product do I need?
Do you need help choosing your product?
Yes No
What is your age?
< 18 18 +
What is the purpose of your use?
Prevention Sleep Skin Relief Relax Other
As Seen On: