CBG and CBD: What's the Difference?

CBG and CBD are both non-toxic cannabinoids, but subtle differences set these compounds apart. To find out what you need to know about CBG and the unique benefits it could offer compared to CBD, keep reading.

Before diving straight into the differences between CBG and CBD, let's first outline the basic principles of CBG.

Cannabigerol (CBG) is one of the very first cannabinoids produced by hemp. During the plant's seedling phase, enzymes react with plant acids to create CBGA. Later, CBGA becomes CBG due to decarboxylation (heat). It's also at this stage that dozens of other cannabinoids begin to form.

Without getting bogged down in scientific reactions and chemical structures, what it means is that without CBGA (and by extension CBG), other cannabinoids, such as CBD, wouldn’t exist. The conversion of plant acids to CBGA effectively kick-starts a chemical chain reaction that leads to the 100+ cannabinoids we know about so far.

However, the reason you may not have heard about CBG, or seen it in products, is because natural levels inside hemp are much lower than CBD (typically less than 1%). However, despite its elusive nature, CBG shows significant potential thanks to its versatile interaction with the mind and body.

What are the effects of CBG?

Research into the impact of CBG is still in its infancy, and there's lots to learn. From the preclinical studies that have taken place, we know that CBG is non-toxic and appears to influence both CB1 and CB2 receptors.

With receptors spread all over the body, the potential impact on our physiology is significant. The focus of studies into CBG currently extends to:

Encouragingly, researchers remain highly positive about the potential of CBG, and more detailed and comprehensive studies are taking place with greater frequency.

What are the differences between CBG and CBD?

Despite originating from similar chemical pathways, CBD is distinct from CBG in chemical structure and concentration within hemp plants.

CBG occurs when we remove the extra carboxyl group from CBGA via decarboxylation. When you expose CBGA to heat, it changes from a raw, acidic compound to an activated variant (CBG). A similar process occurs for CBD, but CBDA is the precursor compound in question.

First, let's start with the similarities between CBD and CBG. Both are non-toxic and non-psychotropic, meaning they aren’t dangerous and won't get you high. And although research is limited, the potential side effects of both compounds appear mild.

However, when you look at the mechanism of action, that's where several distinct differences come to the fore. We mentioned above that CBG interacts with both CB1 and CB2 receptors—this is a major variation from CBD.

CBD works by influencing the endocannabinoid system as a whole rather than binding with specific cannabinoid receptors. It does have some affinity for CB2, but not to the same degree as CBG.

CBG, on the other hand, shows an affinity for both types of receptors, giving it significant potential. The brain contains an abundance of CB1 receptors, while most CB2 receptors are located in the immune system.

We've mentioned the practicality of CBG, but it's worth highlighting again. With only an estimated 1% of hemp's dry weight consisting of cannabigerol, it's far more difficult to isolate than CBD. By comparison, it's estimated that CBD levels in mature hemp plants are roughly 10% (with a pretty sizable degree of variation).

Isolating CBG is not only difficult, but expensive too. Manufacturers need state-of-the-art equipment and expert knowledge to harness ratios anywhere close to what you see in traditional CBD products. 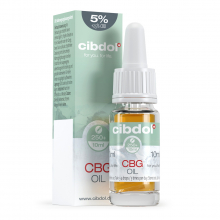 Fortunately, Cibdol has a highly sophisticated laboratory allowing for the formulation of unique cannabinoid products—products that include greater concentrations of CBG.

All Cibdol products harness a full-spectrum extract, meaning our oils, creams, and supplements contain a balanced mix of non-psychotropic cannabinoids, terpenes, and more. While the majority of the extract is CBD, the cannabinoid works alongside CBDV, CBN, CBC, THCA, and, of course, CBGA and CBG.

Full-spectrum products may benefit from the entourage effect, a unique phenomenon of chemical synergy between cannabinoids, terpenes, and others cannabis compounds. Essentially, the more compounds in a formula, the more effective the product potentially becomes.

Choosing a full-spectrum CBD oil from Cibdol means you'll gain a small amount of CBG's benefit, although not to the same degree as the more dominant cannabinoids. Full-spectrum oils serve as an excellent introduction to CBG and the overall wellness impact of cannabinoids.

With expert precision, we've created formulas that feature CBG more heavily. You can now experience its impact in both oil and isolate form.

While our CBD oil still contains trace amounts of CBG, our dedicated CBG products have much greater concentrations. Don’t worry though, both options are non-toxic and free from GMOs, additives, and unwanted chemicals, so feel free to experiment.

Our 2.5% and 5% CBG oils focus on cannabigerol's potential alongside CBD and other cannabinoids for a comprehensive boost to well-being. If, however, you're interested in formulating your own CBG oils, you can use our CBG isolate as one of the core ingredients. With a purity of 97–99%, it’s the closest you'll get to a cannabigerol-exclusive wellness experience.

To experience the versatile influence of CBG, why not browse the Cibdol store for full-spectrum products, CBG oils, and CBG isolate? If you have any other questions about the potential of CBG, learn everything you need to know using our CBD Encyclopedia.