Are cannabinoids absorbed through the skin?

Cannabinoids are garnering interest in the world of science. Dozens of these molecules appear in the cannabis plant, and many of them are showing promising results in animal and human studies.

Cannabinoids are typically ingested orally, sublingually, or inhaled through a vaporizer. However, cannabinoids such as CBD can also be found in a whole range of cosmetic products including creams, lotions, and balms. But how exactly do cannabinoids affect the skin? Do they pass through this protective barrier, or are their effects only skin-deep?

Do cannabinoids pass through the skin?

Upon applying a cannabinoid product to their skin, people often assume the cannabinoid enters their bloodstream. But just how true is this supposition? Well, it really depends. CBD and other cannabinoids can be applied to the skin in two distinct methods: topical and transdermal.

Topical application refers to creams, ointments, and other cosmetic products designed to be massaged into the epidermis—the topmost layers of the skin. These products target the skin itself and don’t ferry cannabinoids into the blood vessels of the derma below.

However, transdermal CBD isn’t just a matter of rubbing the cannabinoid into the skin. It requires several adjuvants to make a hydroalcoholic gel capable of penetrating the epidermis. THC also appears to permeate the skin through lipophilic pathways, as evidenced by a 1998 paper that showed transdermal application of delta-8-THC—a more stable form than delta-9-THC—to sustain delivery of the cannabinoid into the bloodstream over 24 hours.

Although studies on transdermal cannabinoids are few and far between, this method of application could serve as a way to bypass the digestive system and deliver cannabinoids directly into the bloodstream. This method of administration resembles the pathway of sublingual ingestion. Multiple patents exist for transdermal application of cannabinoids, and companies offer products featuring varying ratios of THC, CBD, CBN, and THCA.

How cannabinoids interact with the skin

Although transdermal delivery manages to introduce cannabinoids into the bloodstream, topical products offer a different advantage. The skin—much like many other areas of the body—harbours cannabinoid receptors. The endocannabinoid system (ECS) plays a regulatory role in the body and helps many different biological systems maintain homeostasis. The skin is no exception.

A review published in Trends in Pharmacological Sciences states that the endocannabinoid system of the skin plays a key role in several crucial processes. External cannabinoids share a similar structure to those found in the body, and also target the same receptor sites.

Several studies have investigated the effects of cannabinoids on common dermatological issues. For example, a study in the Journal of Dermatological Science looked at the effects of this family of molecules against keratinocyte hyperproliferation, which is associated with
red, flaky, and scaly skin.

These uncomfortable symptoms arise as the immune system mistakenly attacks healthy skin cells—an issue of homeostatic regulation. This leads to a rapid build-up of skin cells on the surface of the skin. The study found THC, CBN, CBD, and CBG to inhibit keratinocyte production and help restore balance in the skin. That said, more studies are needed to confirm these findings.

Researchers also looked at how cannabinoids affect overproduction of sebum. When this oily substance builds up in the pores, bacteria can form and begin to cause red blemishes. Research published in The Journal of Clinical Investigation tested the effects of CBD on human sebocytes, cells that pump out excess sebum. The researchers found that cannabinoids might help these cells behave normally by acting on TRPV4 and A2A receptors.

Conclusion: cannabinoids and the skin

Although research remains in the early stages, cannabinoids certainly produce intriguing effects in regards to the skin. The discovery of the ECS in our largest organ raises many questions on the role(s) of cannabinoids in dermatological research. 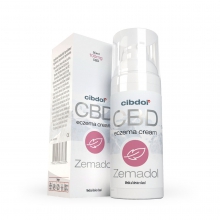