Internationally acclaimed researcher Dr Arno Hazekamp, PhD, has a deep passion for medicinal marijuana and an even deeper understanding of the plant’s biochemistry. His expertise, combined with his role in the Legal Cannabis Coalition, gives him a unique overview of cannabinoids, terpenes, and beyond.
Read more.
Back

What's the difference between CBD and THC?

CBD, short for cannabidiol, and THC, short for tetrahydrocannabinol, may not be the only compounds found in cannabis, but they are the two most discussed. Keep reading to find out all you need to know about the differences between these important compounds.

CBD vs THC: The basics

Both CBD and THC belong to a family of chemical compounds called cannabinoids, which exist inside cannabis plants.

It's when we consume cannabinoids, though, that fascinating interactions can take place. These interactions influence vital parts of our physiology, which is why CBD oils and other cannabinoid-based products are so popular.

To date, there are over a hundred known cannabinoids inside the Cannabis sativa species. CBD and THC are the ones produced in the highest quantities, although the precise ratio differs depending on the type of plant.[1]

However, researchers aren’t just interested in these compounds because of their abundance in cannabis plants, but because of their promising interactions with the body. For example, the psychotropic effects (feeling high) of THC have defined scientific interest for decades, meaning smaller, harder-to-isolate cannabinoids have gone unnoticed.

These niche cannabinoids may still influence our body, but being harder to isolate, combined with the difficulty of getting research permits, we understand less about their potential impact.

THC is the main compound in cannabis and is well-known for the psychotropic effects it causes when consumed. These effects include euphoria, increased appetite, relaxation, and changes in sensory perception.

The difference in how cannabinoids affect our body stems from their interaction with specific receptors (more on these shortly). THC, for example, influences certain brain regions, which triggers significant changes in our thoughts and emotions.

Cannabidiol (CBD) is the second most abundant compound in Cannabis sativa, but that doesn't make it any less impactful. CBD possesses a few unique abilities that THC can't match. It's also the main ingredient in the popular wellness supplement CBD oil. 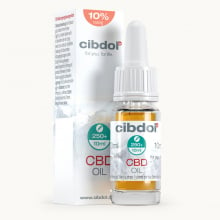 CBD is considered generally safe (with a low risk of side effects), doesn't induce a high, and is said to have the potential to impact well-being by supporting critical biological processes.

Where do CBD and THC come from?

We've briefly covered their origins already, but both CBD and THC come from the Cannabis sativa species, forming an essential part of its chemical composition.

Cannabis sativa is a diverse plant species split into dozens of types, subspecies, and strains. Hemp and marijuana are two well-known variants, but there are thousands of ways to classify the species, and each variety has slightly different attributes.

All members of the Cannabis sativa family do, however, have one thing in common―a chemical structure featuring CBD, THC, and hundreds of other cannabinoids, terpenes, and flavonoids. Now, there are other plant sources of these compounds (flowers, herbs, fruits, and vegetables), but Cannabis sativa has, by far, the greatest concentration of cannabinoids.

What's the difference between hemp and marijuana?

The main difference between hemp and marijuana is their chemical structure. While the plants may look similar, after careful examination, it's a different story.

Hemp, a common agricultural crop grown all over Europe, is naturally rich in CBD and low in THC, making it legal across much of the modern world (provided THC levels remain under 0.2–0.3%). Fortunately, commercial breeding has significantly reduced THC levels in hemp, making it a prime candidate for CBD oils, capsules, and more.

Marijuana, on the other hand, is high in THC, but can, depending on the strain, contain significant levels of CBD. Unfortunately, given the legal challenges that come with THC, it's not always a viable option for the CBD industry.

How CBD and THC affect the body

As such, CBD may influence:

THC works in a more straightforward manner, binding directly with cannabinoid receptors in the brain and digestive system. It's this interaction that causes the psychotropic side effects we hinted at earlier, resulting in physiological phenomena such as:

As you can see from the difference in potential effects, these two compounds act in vastly different ways―despite coming from the same plant species.

Significance of the entourage effect

Although a topic in and of itself, it is worth briefly mentioning the entourage effect.

We've outlined the differences between CBD and THC, but there is also merit in using multiple cannabinoids together.

Research has shown that when cannabinoids exist together, you can enhance their respective effects, although there's still much to learn about ideal combinations and ratios.[2]

That's not to say they can't prove useful when isolated, but the potential for broader or longer-lasting effects is improved when you use CBD, THC, and other compounds from the cannabis plant together.

Fortunately, full-spectrum CBD extracts are ideal for taking advantage of the entourage effect. They contain a greater selection of cannabinoids, terpenes, and flavonoids compared to broad-spectrum or CBD isolate products.

The legal status of CBD and THC

When explaining the differences between CBD and THC, it's easy to focus on chemical structures, biological effects, and preclinical studies. But there's one defining characteristic that dramatically separates these two compounds―legality.

While CBD is widely accepted, THC is not.

For any CBD product to be legal (regardless of whether it comes from hemp or marijuana), it must contain THC levels below the legal threshold. Now, this threshold does vary from country to country, but it is usually 0.2% in Europe and 0.3% in the United States.

The main takeaway is that CBD is generally legal to consume, and THC isn't―unless kept under a specific percentage. However, local regulations can vary, so it's highly recommended you check the legislation in your area to avoid any issues.

If you are looking for CBD oils, capsules, supplements, and cosmetics that adhere to EU regulations, browse the Cibdol store for a complete selection. Or, you can discover more about the effects of CBD and how it interacts with the human body in our Education section.