Can CBD Help To Treat Psoriasis?

In recent times, CBD has risen to prominence in the cosmetics and skin care industries. It is often featured as a key ingredient in topical products due to its potential soothing and revitalising benefits. It should certainly come as no surprise that CBD is a highly sought-after cannabinoid. But how does it fare against skin conditions such as psoriasis? Can the secret to managing and relieving symptoms be found with cannabidiol?

Before we determine CBD's potential to soothe psoriasis, we first need to understand what the condition is and how it impacts the human body. Known to affect over 125 million people worldwide, psoriasis is a chronic, immune-mediated skin and joint disorder. It primarily manifests itself as a skin disorder, and appears in a variety of different forms. These include plaque-type, guttate, inverse, pustular, palmoplantar, and erythrodermic psoriasis—each one varying in symptoms and treatments.

Psoriasis tends to cause red and flaky patches of skin to appear. Common locations include around the elbows, knees, scalp, and lower back regions. However, the condition can occur anywhere on the body.

While there are numerous types of psoriasis one can develop, the symptoms are usually very similar. Those impacted often experience itching, burning, and soreness. However, these symptoms often arise as part of a cyclic pattern, flaring up for a period of a few weeks to a few months, and then disappearing for a time.

The severity of these symptoms really differs from person to person. For some, psoriasis may only present itself as a minor irritation, and can be quickly and easily remedied. For others, however, symptoms may be so severe that they significantly impact a person's well-being and quality of life.

Psoriasis is caused by an increase in skin cell production. Normally, skin cells are made and replaced over a period of every 3–4 weeks. This renewal is sped up when psoriasis occurs, as cells are replaced every 3–7 days instead. The rapid renewal leads to a buildup of skin cells that develops into the red, flaky, and itchy patches associated with the condition.

There are numerous underlying causes of psoriasis. The condition has a strong genetic component, so those with a family history may be more susceptible than the average person. The condition can also be triggered by trauma, infection, and certain medications. Certain conditions of the kidneys and liver have also been associated with psoriasis, as has emotional stress.

Ultimately, psoriasis is a disorder of the immune system. Part of the cause involves the migration of T cells into the dermis. This, in turn, triggers the release of substances such as cytokines that contribute to local inflammation and keratinocyte proliferation. It is these substances that are responsible for the symptoms associated with psoriasis.

How is psoriasis treated?

There are numerous ways psoriasis symptoms are treated. In the first instance, one may consult a medical professional and subsequently be referred to a dermatologist. It is at this point that a course of treatment will be offered. The type of treatment will vary depending on the severity of the diagnosis, and is typically divided into two methods: internal and external.

Topical creams and ointments are prescribed to soothe symptoms and reduce inflammation for those with mild psoriasis. Those with moderate to severe psoriasis (if the condition covers 5–10% of a person's body) may be offered other treatments, such as systemic drugs. These drugs will reduce symptoms and slow the growth of the skin cells responsible.

Other treatments for psoriasis include phototherapy. This is a method of slowing the production of skin cells by using waves of ultraviolet light.

Of course, the majority of these treatments are for those with severe psoriasis symptoms. But prescribed or pharmacy-bought treatments are not the only options available. More and more people are turning to CBD as a means of potentially easing symptoms. Much like the aforementioned treatments, CBD has both internal and external applications.

CBD for psoriasis: What’s the connection?

So, how does CBD factor into the treatment of psoriasis? As we know, CBD is both a popular daily supplement and a skincare ingredient. This is in large part due to its good safety profile, non-psychotropic nature, and overall versatility.

CBD interacts with the human body via the endocannabinoid system (ECS). This system extends throughout the body and plays important roles in skin health and function. More specifically, the ECS mediates[1] cell proliferation, growth, differentiation, apoptosis, and hormone production. Given CBD’s balancing influence on this system, it stands to reason that externally applied cannabidiol could soothe some of the sensitivity associated with psoriasis.

Those affected by psoriasis often look to use topical creams as their first means of dealing with symptoms. By combining the proven prowess of a topical formula with the additional benefits of CBD, the cannabinoid can effortlessly penetrate the skin to produce its effects.

With this in mind, Cibdol has created Soridol. Soridol is a Class 1 medical device cream specifically designed to alleviate the symptoms of itch and pruritus associated with psoriasis. The CBD within the formula works to nourish and protect the skin, and the unique liposomal formulation allows for deep penetration into the areas where it is needed most.

Soridol has been carefully crafted using the best-quality ingredients, moistening and protecting the skin with additional vitamins and antioxidants. These are important for normal cell division and intercellular communication. This spurs on the maturation of keratinocytes without the harshness of chemicals. Even without the included CBD, the cream is designed to improve the skin's structural and defence systems, restoring the pathological pathways that trigger symptoms of psoriasis.

As people with psoriasis typically have vitamin deficiencies, Soridol also includes vitamin D. A lack of this nutrient may contribute toward thickened layers of the dermis and itchy and inflamed skin. Soridol also contains omega 3, 6, 7, and 9 fatty acids, vitamin A, and inositol to cover all of the bases when it comes to the best-possible skin care available. 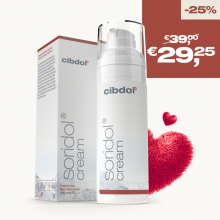 What about CBD oil for psoriasis?

It's not just topical creams that can deliver a dose of CBD. Those looking to boost their well-being from within are turning to CBD capsules and oils. By ingesting CBD, users can experience the potential benefits in a much more holistic way. Whereas topical creams work locally to target specific areas, internally, CBD acts in much more indirect ways. The effects might be prominent in some users, while others might not sense any major change. It really does vary from user to user.

Those looking to use CBD oil or capsules as part of their daily routine should form a benchmark of how they feel before, during, and after consuming. This is the best way to track your progress with CBD.

Of course, there is promising scientific research concerning CBD's influence on psoriasis, but as this research is in its infancy, it’s too early to confirm CBD’s potential as a future psoriasis treatment.

If you're interested in trying Soridol or CBD oil for yourself, why not head over to the Cibdol store for an incredible selection of cannabinoid-infused products? Or, if you want to learn more about the power of CBD for the skin, search our extensive CBD Encyclopedia.