What is CBG (Cannabigerol)

With over a hundred different cannabinoids inside hemp, there's a lot still to learn. However, cannabinoids like CBD and CBN wouldn't even exist without the precursor molecule CBG. To find out what you need to know about cannabigerol and its potential role in well-being, keep reading.

What is cannabigerol (CBG)?

Cannabigerol (or CBG for short) is the non-toxic molecule we have to thank for other key cannabinoids. Without it, CBD, CBN, CBC, and various other cannabinoids wouldn't exist. The reason cannabigerol plays such a pivotal role in cannabinoid development has to do with hemp's chemical structure and how, as the plant grows, it creates different compounds.

Industrial hemp does not start life with high CBD levels; instead, the chemical structure changes over time as the compounds within react to various catalysts. In CBG's case, it is one of the first cannabinoids to form after CBGA reacts to enzymes (geranyl pyrophosphate and olivetolic acid) during the plant's seedling phase.

The creation of CBG kickstarts a chain reaction of chemical changes that eventually leads to more prominent cannabinoids such as CBD, CBC, and THC. However, acting as a precursor molecule isn't CBG's sole responsibility—the compound appears to have some therapeutic value of its own.

How does CBG work?

CBG works via similar mechanisms to other cannabinoids, interacting with cannabinoid receptors spread all over the body. The reason it's not given as much of the limelight as CBD, however, is that mature hemp plants only contain tiny amounts of CBG by comparison (approximately 1% of a mature plant's total cannabinoid content).

Based on early preclinical studies, we know that CBG is non-toxic, won't get you high, and appears to show an affinity for both CB1 and CB2 receptors. This trait, in particular, is unique because most cannabinoids tend to favour one or the other—not both. An affinity for both receptors and a lack of side effects means the therapeutic potential of CBG is significant.

For now, the biggest challenge remains isolating large quantities of CBG and establishing its baseline behaviour in the body. While that may sound like a lot of work, fortunately, research is already underway.

What does the research say on CBG?

Research into the therapeutic value of CBG is minimal. Of the studies completed, the vast majority are conducted in vitro or using animal models. However, that's not to say these studies aren't valuable; they still provide a strong indication of the compound's influence.

An animal study[1] investigating CBG's effect on Huntington's disease showed exciting results, with the cannabinoid reportedly demonstrating strong neuroprotective qualities. The researchers concluded that their results "open new research avenues", but that the cannabinoid's mechanism of action is unclear.

Another study[2] found that CBG may have antibacterial qualities, mainly when used alongside cannabinoids such as CBD, CBC, and CBN. There's also some preliminary research[3] investigating if CBG has a positive impact on irritable bowel disease (IBD) and glaucoma, but both require more definitive results before making a firm conclusion.

What's the legal status of CBG?

Legality is always a complex subject with cannabinoids, primarily because they belong to the same family as THC, an illicit molecule with psychotropic side effects. However, provided cannabigerol comes from industrial hemp, the compound is considered legal.

CBG is not scheduled by the UN Convention on Psychotropic Substances or the Controlled Substances Act, making it perfectly acceptable for all manner of cannabinoid products. All Cibdol CBG products come from the finest naturally grown hemp, while independent third-party testing ensures extracts are free of THC.

Thanks to Cibdol's expertise and state-of-the-art equipment, our traditional full-spectrum formula provides small amounts of CBG, while our CBG oil and isolate focus exclusively on the cannabinoid's potential to benefit well-being.

Cibdol uses a full-spectrum extract to capitalise on the entourage effect. This unique phenomenon of cannabinoid synergy is believed to enhance the overall effect of CBD oils and other products. While our CBD oils focus mainly on cannabidiol, they also contain small amounts of CBN, CBC, CBDA, and, of course, CBG.

If you're interested in safely exploring the potential of CBG, our CBD oils are an excellent place to start. Not only is every oil independently tested by a third-party laboratory, but we use the finest naturally grown hemp as our raw material.

However, thanks to Cibdol's expertise and dedicated laboratory, we've carefully and safely extracted greater ratios of CBG. The result is a much stronger focus on cannabigerol, without losing the wellness-enriching presence of CBD and other cannabinoids. 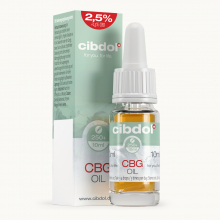 Cibdol's industry-leading isolate is as close as you can get to a pure CBG wellness experience. Highly concentrated (97–99% pure), it's perfect for users looking to formulate their own cannabinoid oils. With independent testing on every batch and zero risk of psychotropic side effects, it's the ideal way to explore CBG's versatile influence.

While we may only have a small understanding of CBG's potential, its lack of toxicity and synergy with other cannabinoids puts it at the forefront of natural wellness supplements. More research into CBG is sure to be on the way, so let's hope it uncovers all of the effects this cannabinoid has to offer.

Interested in exploring the therapeutic potential of CBG for yourself? Browse the Cibdol store for a complete range of full-spectrum products and CBG-focused goods. Or, if you want to take a closer look at CBG and how it compares to CBD, visit our extensive CBD Encyclopedia.