What is CBN (Cannabinol)?

CBN is one of the hundreds of cannabinoids to explore and discover within the hemp and cannabis plants. Keep reading to find out the key attributes of CBN, a non-psychotropic cannabinoid that only exists because of THC.

CBN, or cannabinol, is an organic compound found in small concentrations inside varieties of hemp and marijuana. CBN occurs naturally when THC degrades from exposure to oxygen. However, unlike THC, CBN is non-psychotropic and does not induce a high. CBN interacts with the body via activation of cannabinoid receptors CB1 and CB2.

Large concentrations of CBN are challenging to isolate because they only exist in older hemp plants or degraded plant material. Despite being an analogue of THC, CBN’s chemical structure is closer to that of CBD. CBN is gaining popularity for its wide range of potential benefits.

• Exists as a metabolite of THC, after exposure to oxygen
• CBN appears non-psychotropic
• May act as an aid to sleep, a pain reliever, and an appetite stimulant
• Binds with both CB1 and CB2 receptors, but shows a stronger affinity for the latter
• First identified in 1940
• CBN shows immunosuppressive and anti-inflammatory properties

Due to how CBN is synthesised, research into its effects is limited. The majority of studies are still in pre-clinical or animal testing phases. And, although early indications appear positive, larger, more extensive studies are needed to quantify the cannabinoid's full effects.

Despite being unable to identify the mechanism of action, a 2008 study published in the Journal of Natural Products outlined the antibacterial qualities[1] of several cannabinoids. Alongside CBD, CBG and CBC, CBN “showed potent activity against a variety of methicillin-resistant Staphylococcus aureus” (strains of MRSA bacteria).

In 2005, an animal model of amyotrophic lateral sclerosis (ALS) performed by the University of Washington, explored the possible effects of CBN. Researchers wanted to understand whether the cannabinoid could affect disease progression[2] and survival rates. They concluded that their treatment of 5mg/kg/day “significantly delays disease onset by more than two weeks while survival was not affected”.

Although the appetite-inducing qualities of THC are well documented, the downside is that the compound induces psychotropic side-effects. This led the University of Reading to test whether cannabinol could influence appetite[3], but without the unwanted side effects. During the study, cannabinol showed an “increase in appetite behaviours”, with researchers concluding that “cannabinol could, in future” provide an alternative to THC.

A comprehensive review published in the FASEB Journal examined the effect of numerous compounds found within species of Cannabis sativa. Of the twelve reviewed, CBN was found to reduce inflammation[4] associated with arthritis. Overall, the review concluded that the compounds were “generally free from adverse effects”. The researchers did note, however, that the mechanism of action differed from traditional NSAIDs and further investigation was warranted.

A 2007 study by the Hebrew University of Jerusalem reviewed the effect of cannabinoids in disease and health. They highlighted that several studies supported a correlation between glaucoma and hypertension. Fortunately, CBN was one of the compounds believed to reduce intraocular pressure, and therefore represents a possible alternative[5] for patients with glaucoma.

CBN is not scheduled under the United Nations’ Single Convention on Narcotic Drugs, however, due to CBN being an analogue of THC, laws and restrictions at a local level may differ. 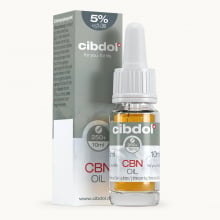 With over a decade of experience writing about CBD and cannabinoids, Luke is an established journalist working as the lead writer for Cibdol and other cannabinoid publications. Committed to presenting factual, evidence-based content, his fascination with CBD also extends to fitness, nutrition, and disease prevention.
Sources