CBD and caffeine: Can I mix them?

Many people refuse to let the day begin until they've had their morning coffee. Used to combat deadlines and fatigue at work, caffeine truly has become a cornerstone of modern society. Whether you look to drink it hot or cold, one thing is for sure; moderation is key. While small amounts of caffeine can be beneficial, too much can leave you feeling jittery and anxious.

With more and more people taking a daily dose of CBD, oftentimes in the morning with other supplements and vitamins, can it potentially counteract the side effects that coffee brings on?

Before we can factor in CBD's potential influence on our morning coffee, it's best to get an understanding of caffeine itself.

An alkaloid compound, caffeine is a natural stimulant that is most often found in coffee, tea, and cacao plants. However, caffeine's presence is also seen in energy drinks, supplements, and even breakfast cereals—meaning you don't have to look very far to get your fix, whether intentional or by accident. Caffeine affects the central nervous system and is used as a means of keeping people alert and awake.

Caffeine has been used for centuries, with historians dating its first use in tea back to 2737 BCE. The origin of coffee is a little bit blurrier than its tea counterpart, leading to much speculation.

There is a legend of an Ethiopian shepherd discovering coffee by noticing that his goats were eating coffee cherries straight from the plant and subsequently becoming energetic. While this may sound like a tall tale, overall, the discovery of coffee is hazy. However, more credible indications of its first uses appear in accounts from the 15th century, giving a much more detailed look into how the bean is prepared and brewed.

Regardless of how caffeine and coffee have been popularised in our society, it's here to stay. But, what do we know about the true effects of caffeine on our bodies?

What are the benefits and effects of caffeine?

Caffeine's natural stimulant properties are what draw a lot of people to its use. However, the interaction is not as straightforward as you might think. Rather than taking direct action, caffeine inhibits receptors activated by the neurochemical adenosine.

Adenosine is hugely important because of its role in managing our sleep-wake cycle. When adenosine is released, it encourages the body to rest and reduces brain activity. Caffeine works to block these receptors from binding with adenosine. Under normal circumstances, adenosine levels build throughout the day, until we finally sleep in the evening. When caffeine is ingested, our natural sleep cycle is interrupted, leaving us more alert.

Not only keeping us awake for longer, the use of caffeine also has other notable benefits and effects. Antagonising adenosine receptors allows other neurochemicals, such as dopamine, epinephrine (adrenaline), and norepinephrine to have a more prominent effect on our bodies.

Dopamine is linked to our biological mechanism for pleasure and reward, and even has the potential to reduce blood pressure and heart rate. On the other hand, epinephrine and norepinephrine are responsible for mobilising the brain and body for action.

In addition to the benefits already mentioned, caffeine has also been linked to increased metabolism, improved exercise performance, and protection against heart disease. However, maintaining the fine line between pleasant stimulation and overloading the body with caffeine will depend on the user’s personal tolerance and the amount of caffeine ingested. Moreover, there are side effects associated with too much caffeine intake.

What are the side effects of caffeine?

There's no denying the potential benefits that caffeine brings, but that's not to say there aren't some side effects as well. While not everyone will experience side effects, they are a common occurrence for those who overindulge or react strongly to caffeine in general.

Among those that suffer from anxiety, symptoms can be exacerbated with the use of caffeine. As mentioned, while it blocks adenosine, it can allow the release of adrenaline into the body. This can, in turn, cause heightened anxiety as the body takes on a “fight-or-flight” response to the caffeine. If you feel that you are often nervous or jittery after drinking a large coffee, for example, this could be a potential sign of a side effect.

While caffeine has the ability to keep users alert, too much can cause insomnia. This may impact some more than others, and, indeed, elderly users tend to experience this side effect more than the young. However, if you feel that you are experiencing insomnia after drinking coffee or energy drinks, it may help to reduce the amount you consume.

What about caffeine addiction and withdrawal?

Users that find themselves needing caffeine several times a day could be seen as addicted to it. As they become more dependent on the substance, more is consumed, and at a greater frequency. This can bring about the side effects already mentioned, but it's actually the withdrawal symptoms from caffeine use that can cause issues such as headaches and other uncomfortable physical and psychological symptoms.

Because of its stimulant effect, it should come as little surprise that caffeine can cause an increase in blood pressure and heart rate in some instances. While this occurrence is normally associated with excess consumption, users who notice these symptoms should look to reduce their caffeine intake.

How does CBD interact with caffeine?

Now that we’ve examined caffeine’s beneficial effects and side effects, how might CBD interact with your morning coffee? Before we can understand how two compounds from seemingly opposite ends of the spectrum work together, we must first look at CBD in isolation.

Cannabidiol is a compound found in Cannabis sativa (hemp) that interacts with our endocannabinoid system (ECS), among numerous other molecular targets. CBD experiences widespread use as a daily supplement to enhance well-being. Although research has yet to confirm CBD’s full suite of benefits, preliminary studies and anecdotal accounts report that CBD can ease the nerves and promote sleep readiness.

These are just a snapshot of CBD’s potential capabilities, but its potential to soothe the nerves is critical, especially when you consider the side effects of too much caffeine. Interestingly, the collaboration between CBD and caffeine is potentially far more intricate than the former merely undoing the side effects of the latter, as both compounds are thought to interact with adenosine receptors[1].

Can I put CBD in my coffee?

While some people choose to take a CBD softgel or capsule as part of their morning routine, it is entirely possible to cut out the middleman and put CBD directly into your coffee. With products such as CBD On The Go!, you can mix pre-measured, specifically dosed 20mg powdered sachets into your brew at home or on the way to work.

What are the potential benefits of mixing CBD and coffee?

By adding CBD to your coffee, you too can experience the potential benefits of both substances. Although the effects of caffeine are profound, especially in large doses, they are somewhat short-lived. Combining CBD and caffeine has the potential to increase alertness and focus for a longer period, while the cannabinoid works to potentially reduce the impact of caffeine's side effects.

As research into the effects of CBD is still in its infancy, our understanding of this unique partnership is very much in the preliminary stages. However, numerous companies are already producing branded coffees infused with CBD.

Balance is the key when it comes to any compound that alters the way we feel, and caffeine is no exception. The easiest way to manage any side effects from caffeine is to keep intake moderate. However, if you are sensitive to small doses or are desperately trying to meet a deadline at work, caffeine taken in partnership with CBD could prove highly effective.

If you're interested in trying this combination for yourself, why not head over to the Cibdol store for a huge range of cannabinoid-infused products? Also, make sure you keep up to date with the latest developments on CBD and other cannabinoids by browsing our extensive and frequently updated CBD Encyclopedia. 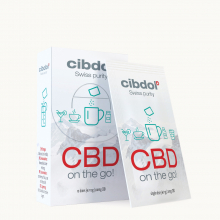 CBD On The Go!