Can You Build Up A Tolerance To CBD?

It is possible to build up a tolerance to some cannabinoids, like THC. THC is the main psychotropic compound in cannabis and delivers its effects by binding to CB1 receptors. These receptors work like little locks that are designed to be opened by endocannabinoids like anandamide and 2-AG, but some plant-derived cannabinoids with a similar structure (like THC) can also bind directly to them.

As a result, people who regularly consume these cannabinoids may find that they need increasingly larger doses in order to feel the same effects. This can also affect the endocannabinoid system’s ability to learn and adapt to factors like stress as it has become over-dependent on THC.

What about CBD? Can it cause tolerance?

CBD is very different from other cannabinoids, and we’re still a ways away from completely understanding this compound and its actions throughout the body. What we do know, however, is that it doesn’t bind to cannabinoid receptors in the same way as THC. Instead, it acts via numerous other chemical pathways. Some resources suggest that CBD can activate over 60 different molecular pathways in the body.

So far, studies indicate that CBD can affect serotonin receptors, vanilloid receptors, GABA receptors, gamma receptors, and more. Other studies show that CBD can inhibit a process known as reuptake, and thereby temporarily increase the amount of certain chemicals in the brain, such as serotonin and anandamide.

While CBD doesn’t bind to endocannabinoid receptors, it can still interact with them indirectly. For example, studies have shown that it can work as an inverse agonist of CB1 receptors. Nonetheless, there is no current research claiming that CBD causes users to develop tolerance. Instead, it’s widely regarded as a safe, non-toxic compound that’s very well-tolerated. A 2011 study[1] published in the journal Current Drug Safety stated that human trials testing various dosages of CBD didn’t cause side effects or tolerance.

What is reverse tolerance?

In fact, some research suggests that CBD may cause reverse tolerance. Unlike THC, which occupies the role of endocannabinoids and can down-regulate the endocannabinoid system, CBD can increase endocannabinoid levels (e.g. by inhibiting reuptake). Hence, over time, users may find that they need lower doses of CBD to get the same results. Though this is currently just theory.

Unfortunately, our understanding of CBD and the endocannabinoid system is far from complete. There’s still a lot more research needed before we can begin making concrete statements about CBD and how it works inside the body. However, current research shows that CBD doesn’t cause tolerance like other cannabinoids might. 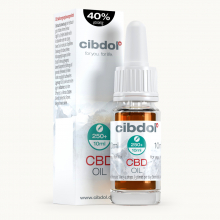