Prevent Noncommunicable Diseases - The Pandemic Of Our Time

What is a non-communicable disease (NCD)?

NCD or non-communicable disease may not be a familiar term to most. Sadly, the reality is that nearly all of us will know someone who has been affected by heart attack, stroke, cancer, asthma, or diabetes. NCD is a category of conditions that occur over a long period of time. In 2008, the world experienced 57 million deaths, of which a staggering 36 million were attributed to NCDs. The expectation is for those numbers to continually rise.

The worst part? Common risk factors are rife, despite their elimination being relatively simple. Tobacco use, physical inactivity, and an unhealthy diet dramatically increase the total number of deaths. However, with minor changes, deaths from cancer and other chronic diseases could be reduced by as much as 40%. The statistics released by the World Health Organisation (WHO) highlight everything we already know, but against a shockingly morbid backdrop. A lifestyle of convenience and excess is killing.

NCD—the pandemic of our time 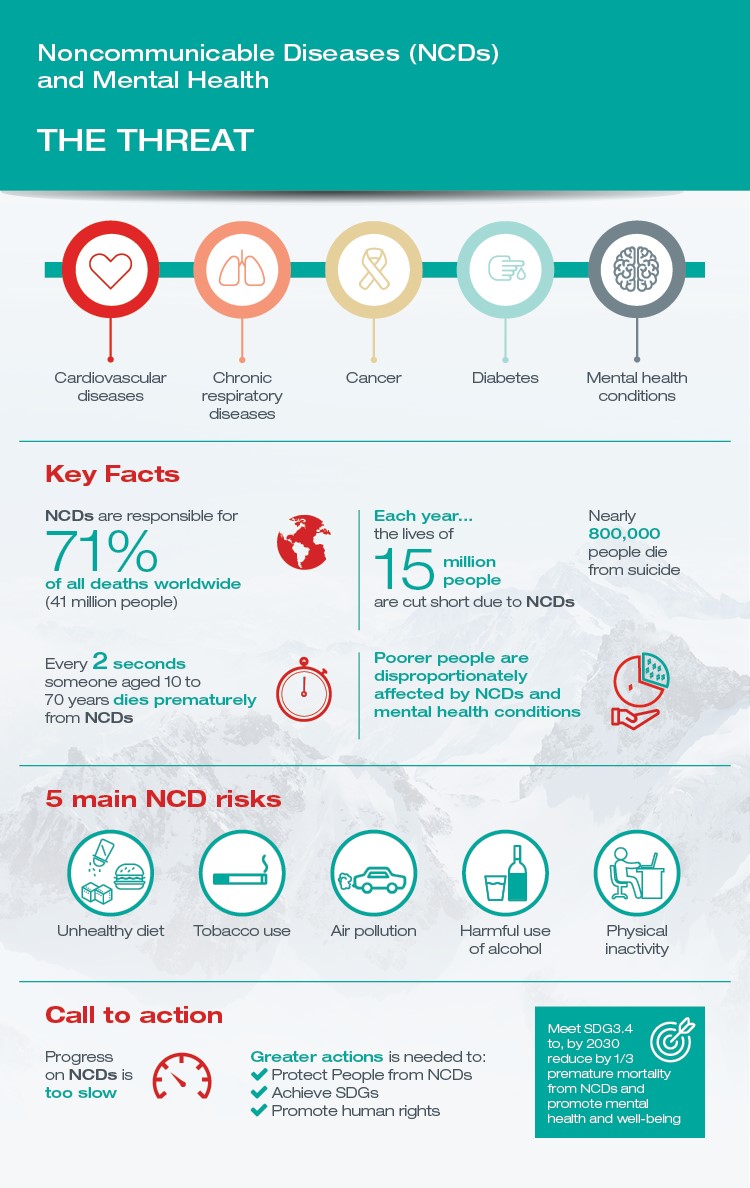 Alongside the statistics published by the WHO, an exclusive editorial was released to highlight how NCDs came to be the biggest killers on the planet. For a long time, infectious diseases caused the largest amount of worldwide deaths. However, as research and medicine improved, so too did our ability to tackle these damaging conditions. Advancements made life easier in Western societies, but a new leading cause of death took hold. A rapid expansion of developed economies, combined with rising healthcare costs, has allowed these chronic diseases to become alarmingly common. 87% of deaths in established economies are the result of NCDs. This is not an issue exclusive to any one country. It affects us all.

The sheer scope of the issue is understandably overwhelming. By breaking it down into manageable chunks, we can start to formulate a plan of action. Tobacco use is the leading risk factor, something governments and society have recently put a lot of effort into combating. However, alongside tobacco use, Western diet is the second-most-common factor and an all too familiar issue. Fortunately, there are parts of the world that have adopted a diet that not only allows them to live longer, but healthier as well. You can read more about it here.

Our modern way of life

The impact of lifestyle—the choices we make about how to live our lives—is significant. In the case of NCDs, unhealthy lifestyle choices are the contributing factor. To expand upon that point, the NCBI outlined several ways that damaging lifestyle decisions have repercussions on multiple areas of our life. The WHO also estimated that “60% of related factors to individual health and quality of life are correlated to lifestyle”.

Nine primary contributors were identified to have the most significant impact on our health, both physically and mentally. They were diet, study, application of modern technology, sex, substance abuse, recreation, medication abuse, exercise, and sleep. In the majority of cases, several of these segments can easily overlap, further compounding potential health issues. The difficulty is being able to spin all of those categories at once. Throw in a job or a family, and micromanaging every aspect needed for a healthy lifestyle becomes incredibly tricky. Instead, we should look at the root cause of the nine factors and see if there is a correlating attribute we can focus on.

We have already covered in detail the detrimental impact of stress. However, when you look at the root cause of several of the nine factors above, stress appears time and time again. Therefore, rather than trying to keep all those plates spinning, focussing on managing stress is more natural and incredibly beneficial. By keeping our stress level under control, adopting healthy lifestyle practices becomes self-fulfilling.

The same can be said for NCDs. On the face of it, non-communicable diseases are vast. Trying to promote a lifestyle that prevents each one would be impossible. Instead, let's focus on root cause again. Chronic inflammation is well-documented as the precursor to several of the conditions categorised as NCDs.

Chronic inflammation—one step away from NCD

Chronic inflammation (CI) is when our inflammatory response fails to stop, despite the initial infection being dealt with. Left unchecked, the buildup of inflammation is believed to lead to diabetes, high blood pressure, and heart disease. It all comes down to connecting the dots between conditions and making changes in our lives to prevent multiple risk factors. To combat CI, the required changes to daily habits are fewer than all the necessary adjustments to avoid NCDs. By reducing the size of the enemy, our chances of defeating it are significantly increased.

All roads lead to the same remedy. Unhealthy lifestyle factors can lead to CI, which has the potential to lead to NCDs. Chronic inflammation is significantly easier to prevent with small changes to our diet and lifestyle. However, the beneficial impact on our health is not small in comparison—it’s enormous.

While diet alone can assist in preventing CI, it is always advantageous to have a helping hand. In this case, several research papers point towards CBD as a powerful anti-inflammatory and critical component in the fight against chronic inflammation.

It is important to note that the remainder of this article will be quotes from each study to highlight some of the advancements being made. While the studies are not entirely conclusive, nor do they represent the views of Cibdol, each paper is an indication of the fantastic potential CBD has.

Researchers noted that “cannabinoids suppress the inflammatory response and subsequently attenuate disease symptoms”, going on to add, “cannabinoids can either directly inhibit tumour growth or suppress inflammation and tumour angiogenesis”.

The endocannabinoid system: an emerging key player in inflammation

The summary of this review found that “the complexity of what may be called the 'endocannabinoidome' requires approaches that take into account its dynamics and interconnections with other regulatory systems. This endocannabinoidome continues to offer possibilities for prevention and intervention, but multiple target approaches will probably provide the only keys to success”.

This time, researchers discovered that “these data indicate that topical CBD application has therapeutic potential for relief of arthritis, pain-related behaviours, and inflammation without evident side effects”.

Another study concluded that “CBD protects OPCs from inflammatory stimuli and from apoptosis in a cannabinoid receptor-independent manner”.